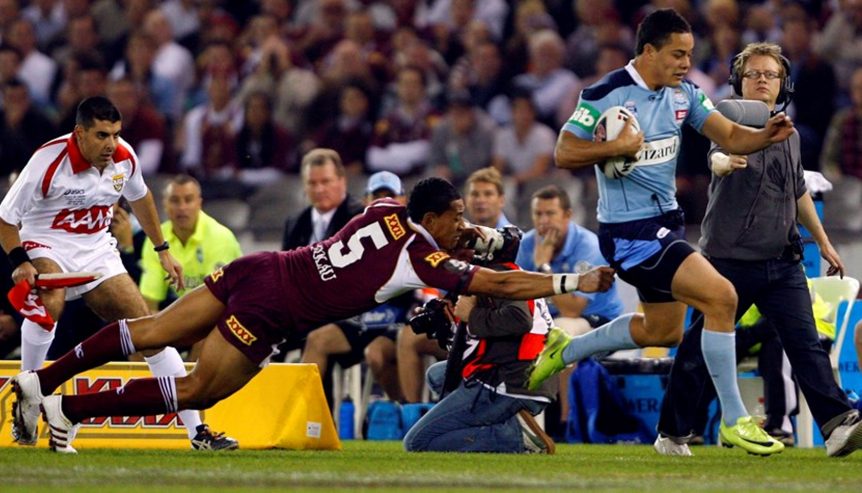 1. History in the making, Game 2, 1994
June 8, 1994 was something very special as league’s finest strutted their stuff on Australia’s biggest sporting stage in front of 87,161 fans. So pumped up were Phil Gould’s men that they held Queensland scoreless – the only other time that has happened in Origin history was Game One in 1990.

2. Let’s get it on! Game 2, 1995
The good folk of Melbourne had never seen the likes of it. Just three minutes in and the first scrum erupted, almost as if it had been scripted. Blues hooker Jim Serdaris let one fly and then it was on for young and old.

3. Welcome to Melbourne, Game 2, 1990
After a decade of games in Brisbane and Sydney, and the novelty that was California in 1987, rugby league ventured south to Melbourne’s Olympic Park. The curious crowd of 25,800 may not have had much idea what was going on but they lapped up the big hits and got to see legends like Lewis and Langer and Stuart and Elias in full cry.

4. Hayne Plane Grounded, Game One, 2009
Not much went wrong for Jarryd Hayne in an incredible 2009 season but at Etihad Stadium on June 3 one blade of grass robbed him of a memorable Origin moment. The Blues flyer stood up Israel Folau on halfway before shifting into overdrive down the left wing.

5. Now that’s a crowd, Game 2, 2015
Origin was back at the MCG for the first time in 18 years and Melbourne took the opportunity to remind everyone why it is considered the sporting capital of Australia.