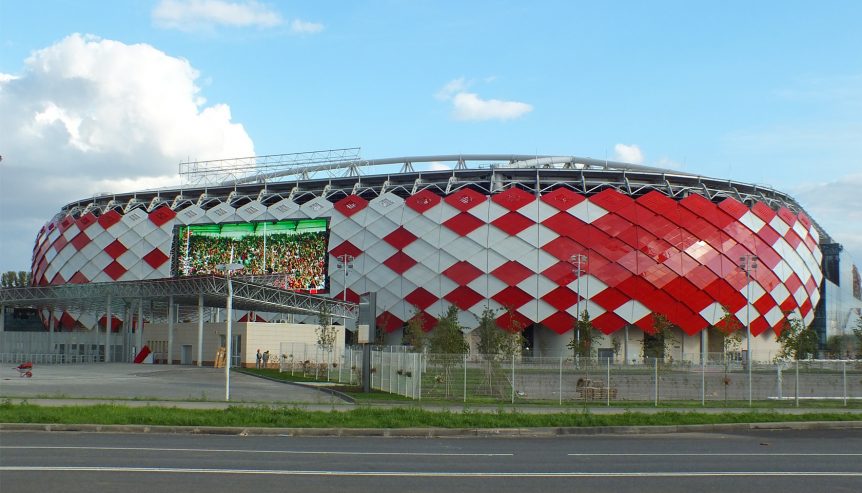 As billions of people around the world eagerly anticipate the start of the 2018 FIFA World Cup™ in Russia, five stadiums are depending on Toro® equipment to help make sure their playing fields are in top condition for the event.

From mowers and aerators to sprayers, utility vehicles and debris blowers, these venues are using Toro products to prepare their fields and grounds to the highest international standards.

“We’re excited to have Toro equipment part of the preparations for the 2018 FIFA World Cup,” said Darren Redetzke, vice president of The Toro Company’s International Business. “These are world-class stadiums, and it’s a tremendous honor to be chosen.”

The following are the FIFA World Cup venues and the Toro products they are using:

Spartak Stadium, Moscow
Home to Spartak Moscow, one of Russia’s most popular football clubs, Spartak Stadium features a façade that resembles chain mail. The design is made up of hundreds of little diamonds representing the Spartak logo, which can change color depending on which team is playing.

This venue’s Toro lineup includes a ProCore® 648 aerator, a MultiPro® 1750 sprayer, a Reelmaster® 3100 reel mower, and several ProStripe 560 walk mowers. The Reelmaster 3100 is a popular choice for football venues in Europe, and was chosen for its proven productivity and quality of cut. It will also remain a product of choice for venues that continue with natural grass after the FIFA World Cup.

Like Spartak Stadium, this venue is also using a ProCore 648 aerator and a ProStripe 560 walk mower. In addition, crews are using a Workman® MDX utility vehicle and a heavy-duty Workman HDX 4-wheel drive vehicle to transport materials and people. Plus, a ProForce™ debris blower will help crews keep areas clear of grass clippings, aeration cores and other organic debris.

Kazan Arena
Designed by the same firm of architects as Wembley Stadium and Emirates Stadium in London, Kazan Arena resembles a water lily when viewed from above. It was originally built for the Summer World University Games in 2013, and a football pitch was installed afterward. Kazan Arena will be home to the Rubin Kazan football club. 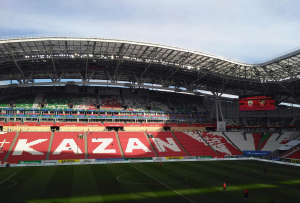 This venue is using a Reelmaster 3100 reel mower at its training facility, as well as a number of ProStripe 560 walk mowers throughout the stadium.

Mordovia Arena, Saransk
This oval-shaped stadium features a bright mix of oranges, reds and white on its facade, honoring the color palette of Mordovia’s arts and crafts. It’s located in the center of Saransk on the banks of the Insar River, and will be home to FC Mordovia.

Mordovia Arena is using a number of ProStripe 560 walk mowers, which are designed to provide a professional cut with a distinctive striped finish.

Nizhny Novgorod Stadium
Situated at the confluence of the Volga and Oka rivers, this stadium is inspired by two aspects of nature in the Volga region: water and wind. The design is made up of fine triangular supports arranged in a circle, with a semi-transparent façade that conceals the bowl of the stadium. It will be the home of the local football club, Olympiets Nizhny Novgorod. 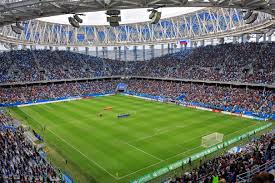 This stadium is using a Reelmaster 3100 reel mower, in addition to having several ProStripe 560 walk mowers at its training facility.
Toro’s distributor for the region, Conquest LLC of Moscow, supplied the Toro products to the purchasing groups working with the stadiums and training facilities.. Conquest’s General Manager Dmitry Koltovoy worked closely with Teodor Denchev, Area Manager, Commercial Equipment for Northern and Eastern Europe at

The Toro Company, to recommend the right equipment for each venue.

Koltovoy also ensured that all of the products were set up before delivery, and Denchev put together a customized training program for the grounds crews to ensure they would know how to optimize the operation of the equipment to deliver the best results based on their unique turf conditions.
“Dmitry and Teo were instrumental in this process, and they’re a big reason why Toro equipment is being used at these stadiums,” explains Anthony Nadalin, senior marketing manager, Toro Europe.

“The FIFA World Cup is a global event and it took a global team to make it happen.”

The 2018 FIFA World Cup runs June 14 through July 15, and is the biggest single-event sporting competition in the world. It takes place every four years and brings 32 teams together from all over the globe, inspiring national pride and a passionate fan base. The 2014 FIFA World Cup reached 3.2 billion TV viewers, with more than one billion tuning in to watch the final.

“For an event of this size and importance, reliability is critical — and that’s a key focus at Toro,” adds Nadalin. “We know sports fields, and we understand how equipment needs to perform to support the productivity of the crew while creating the best surface for the players.”

In addition to these 2018 FIFA World Cup stadiums, Toro products are or have been used at such notable sites and events as Real Madrid Club de Fútbol in Spain, Carnoustie Golf Links in Scotland (host of the 2018 Open Championship), St Andrews Links in Scotland, the Wimbledon Championships in England, Château de Versailles in France, Pinehurst Resort and Torrey Pines Golf Course in the USA,— and many other professional and collegiate sports venues around the world.
For information on Toro equipment and irrigation products for sports fields and grounds worldwide, please visit toro.com.