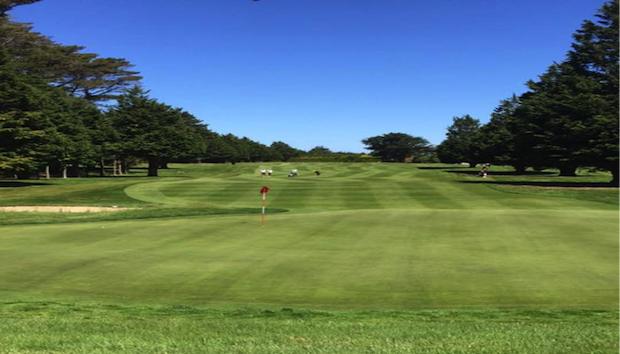 The Otatara Golf Club greenkeepers have earned themselves a well earned break after the completion of the men’s Toro New Zealand Interprovincial in Invercargill a fortnight ago.

The self professed “Dream Team” or DT, lead by Craig Tinker and his trusty side kick Daniel O’Conner featured in last month’s story on social media in turf management. Their online antics from serious golf course presentation to their passion for KFC have meant their fan base has grown to more than 300 likes on Facebook.

While the Otatara links was in superb nick for the tournament, it was mix of hot temperatures and inclement bitterly cold conditions that dictated play throughout the week.

Defending champions Waikato were among the hot favourites to take out the title with four out of five of their team sitting inside the top 15 on the New Zealand Order of Merit.

Bay of Plenty who are always thereabouts come finals day were also tipped to go well, as were Otago who blitzed the field by over 30 shots two weeks prior on the same course in the SBS Invitational – a five-man team strokeplay event involving all the provinces.

Staying true to form it was the Waikato and Otago quintets who began strongly recording early wins while battling 30+ degrees temperatures mid-week. Waikato arguably had the tougher of the draws having to play their matches out of division one, which could be seen as the Pool of Death featuring Bay of Plenty, Canterbury, North Harbour, Manuwatu/Wanganui and hosts Southland.

Their only loss was to Bay of Plenty – who would join Waikato in the semi finals after winning the dog fight for the second spot in division one.

Meanwhile the experienced Otago side were bidding farewell to 34-year-old stalwart Brent McEwan after bringing up 100 games for the province during the week, but they didn’t have it all their own way despite coming out on top in division two.

They had to come from behind in the hot conditions on Wednesday against a fired up Tasman outfit before sealing a playoff spot at the end of play on Thursday against Cinderella side, Northland.

Northland would cling on to a spot in the semis, a feat not achieved by the northerners for over 30 years from a fast finishing Wellington side who left their run too late despite hammering the previously unbeaten Otago 5-0. While Otago could be forgiven for dropping their bundle having already sealed top spot, it no doubt was the kick in the pants they needed for Saturday’s semi.

By the end of the week the weather had taken a turn for the worst and semi-final Saturday became buffeted by strong cold southerlies which made both fixtures gripping affairs.

It was the battle of the blue and golds as the fierce rivalry between Bay of Plenty and Otago produced a tense 3-2 victory to the southerners who progressed to their second final in row and a possible rematch from the 2014 final with Waikato loomed.

Despite Otago gaining the early lead in the majority of the matches, the Bay boys managed to level it up through the middle stages before Otago finished the stronger giving McEwan the chance to finish his 17-year representative career on a high.

But just as things couldn’t get in tighter in the first semi final, Northland began fighting back after a slow start against Waikato who looked to be in control with nine holes to play.

Northland’s Taylor Gill had other ideas, winning the last hole against Sam Vincent meanwhile Luke Brown edged in front of Waikato number one Luke Toomey in the dying stages of their match gaining the ascendancy.

Drama would then unfold with the match all square on the last and everything on the line. Brown’s long birdie attempt kissed the cup and set the scene for Toomey who holed a clutch 25-footer on the last to avoid a playoff and guide Waikato into the final against Otago.

Unfortunately the close encounters from the semi finals weren’t replicated in the final with Waikato repeating the 4-1 score line from the previous year at St Andrews. While Otago didn’t quite give McEwan the send off he deserved, he was Otago’s sole victor-gaining revenge on Denzel Ieremia 2/1 whom he suffered defeat to in the 2014 final.

But in the end the best team throughout the week were deserved winners and back to back champions and Toomey was also named Player of the tournament forthe second year in a row.

Other highlights from the week were from Waikato number five, Chris Charlton who registered his first hole in one on the 12th hole while perennial battlers Poverty Bay managed to snatch a half and a win in their last two games over the more fancied Southland and Aorangi respectively. The half against Southland ended a 19-match losing streak dating back to 2012.

Turf quote for the week:

“It is just a club golf course, cleverly designed, smallish greens, well bunkered and boy can you grow grass down here.” – Southland Times

From tournament director Phil Aicken referring to the Otatara course.

So where to next for the DT crew who earned the praise from NZ golf?
For now they’re happy to sit back and reflect on a successful week and would like to thank their fans – I think that was the translation.