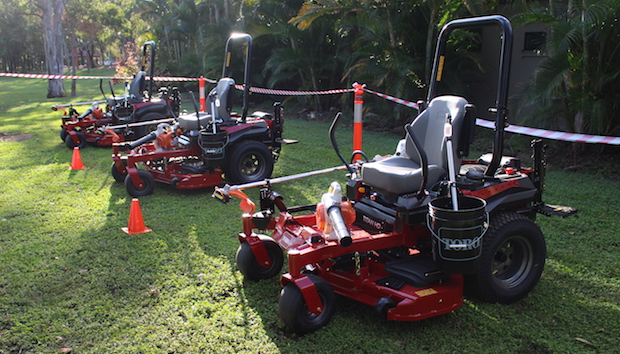 The Toro Red Iron Roadshow made its way to Brisbane last week, giving guests the opportunity to trial the manufacturers’ brand new machinery.

The event, which was held in Melbourne and Sydney before venturing north to sunny Queensland on June 1st, gave those in attendance a glimpse of Toro’s latest products including the TimeCutter HD, which is due for release in the coming months, and the Titan HD.

Toro Australia Senior Marketing Manager for Equipment, Elise Willemsen said the Red Iron Roadshow allows the company to launch their new product range and provides attendees – most of whom are from Toro dealerships – with the chance to receive hands on experience, have all their questions answered by the Toro sales team and better understand the capabilities of the products on display.

“It’s a chance for everyone to get together and for us to launch our new products coming up into the new season,” Elise said.

Guests were split into two groups following the mornings’ product presentations and urged to test out the machinery in a series of real life scenarios, including a time trial, which put the utility attachment compartments of the Titan HD to the test.

The TimeCutter HD, a commercial grade mower featuring the MyRIDE suspension system that promises to give users a 40% smoother ride, was the star of the show and extremely well received by those who had the opportunity to experience it for the first time.

Brian Goodridge, Toro’s equipment product manager, said the MyRIDE system is the vehicle’s key feature and is ideal for those with larger properties that demand typically long and uncomfortable stints on the back of a lawn mower.

“They [the TimeCutter HD] are a commercial grade machine, so someone who’s got a number of acres can use this because they’re nice and robust,” Goodridge said.

“If you’ve got rougher ground, it will be a lot smoother and a lot easier to ride.”

The MyRide system has a number of different suspension settings, making it easier for the owner to adjust it to their personal satisfaction.

“There are three suspension components and the two back one’s are adjustable to your own needs,” Goodridge said.

For those on a budget looking for a cheaper alternative, the soon to be released TimeCutter HD can also be purchased with all the same great features minus the MyRIDE suspension system.

“They do come in a version without the MyRIDE system, but they are still a good, robust, heavy-duty machine with a nice comfortable seat,” Goodridge said.

“Obviously it’s slightly cheaper, but still a good machine for a five to 10 acre block.”

The perks for TimeCutter HD owners don’t end there; the vehicle also offers commercial grade transmission, the likes of which you’re unlikely to see on many other machines designed for domestic use.

“It’s got commercial grade transmission, so a higher level than you’d expect of your normal consumer machine.”

As is to be expected from Toro products, the TimeCutter HD features an engine designed and manufactured by the company itself for exclusive use in Toro machines.

Goodridge believes this is a better way of ensuring the customer is supported if the engine breaks down.

“The engine is our Toro engine, they are engines we produce specifically for our products,” he said.

“The benefit is we support those engines rather than them being a third party engine.”

Goodridge, and everybody at Toro, takes great pride in ensuring their customers are looked after in the event of an engine failure, while products from other brands tend to incorporate an engine or parts sourced from a third party and cannot guarantee they will be provided with a replacement if they encounter an issue.

“At the end of the day, this is all ours and we support the whole lot,” he said.

“That’s something we like to do, support the customer.”

The TimeCutter’s steering is just as impressive as its heavy-duty commercial engine.

Elise believes the absence of a steering wheel makes learning how to manoeuvre the vehicle quick and easy for beginners or first time users.

“Once you use it a couple of times, it’s so much more intuitive than a steering wheel,” she said.

Also on display at the Roadshow was the Titan HD, another new addition to the Toro range.

The Toro salesmen were glowing in their appraisal of the Titan’s versatility, stating that they are capable of operating in even the most trying conditions for lawn mowing without compromising the quality of cut.

“Because the optional catcher system has a blower attached, you can mow wet and heavy grass and that blower will suck it up,” a Toro salesman said.

It also boasts one of the most innovative tool carrying systems on the market, a feature many of the attendees were quite noticeably impressed by when using it to carry around whipper snippers, buckets and blowers.

To top this off, the Titan cutting deck is made out of 7/10-gauge high strength steel, ensuring it can stand up to the most rugged terrain and give its operator years of service.

Although the Titan HD and TimeCutter HD were arguably the showpieces of the event, Toro favourites such as the Z Master (3000 series) and Direct Collect Z (8000 series) were also available to test drive around the hotel courtyard, capping off a wonderful range of Toro machinery.

The Red Iron Roadshow has become a one-stop-shop for interested parties to experience Toro’s latest innovations first hand and has grown considerably since its last visit to Brisbane in 2015.

We can’t wait to see what this exciting company comes up with next!