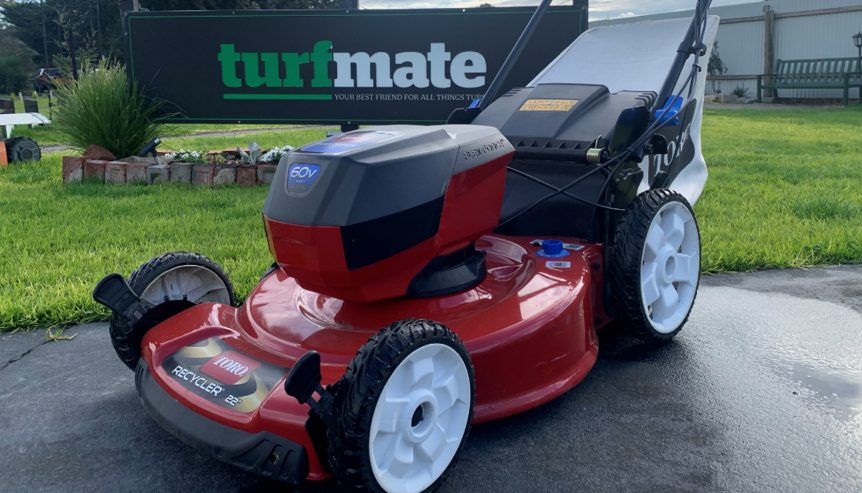 Think that a battery powered mower will struggle to get the job done? Think again. Toro Australia are changing the game for home gardeners with their 22-inch, 60- volt Recycler.

While many battery powered mowers struggle to match their petrol counterparts in terms of longevity and stamina, the combination of the 60-volt interchangeable battery and a Brushless DC powerhead means the Recycler has plenty of power. As Toro Australia’s Product Marketing Manager – Equipment, Brian Goodridge says, anything that you put your petrol mower through, this will do it as well.

“It has a 324-watt hours battery, which is quite a bit of power,” explains Brian. “Some of the other smaller mowers are only designed for small courtyard blocks, but the Recycler can do up to 1300 square metres before you’ll need to charge the battery, so that will let you mow a decent sized block a number of times.”

Brett Macpherson, turfmate’s Sales Manager recently took the Recycler out for a spin and had this to say about the experience.

“We didn’t know what to expect for a battery lawn mower, but this thing had power for days! We threw some thick, wet grass at it, which would stall any engine, let alone something that’s powered by a battery and it managed to mulch it up and spit it out. The unit is also very quick and covers a surprising amount of ground off a single battery.”

The Recycler’s personal pace drive system automatically adjusts its speed to match your walking speed and the 56 cm cut width means it is very productive, taking you less time to mow your backyard.

Some of the other advantages of a battery-powered mower are that they are extremely easy to start, you just press a button and don’t need to worry about petrol or smelly fumes. In an urban setting, it’s also a lot quieter to run than a petrol mower, which means you won’t ever have to worry about complaining neighbours!

Brian mentions that one other popular feature is the SmartStow handles.

“The handles on the Recycler fold up and you can actually store it sitting up on its back, so it takes up a lot less space in the garage,” says Brian. “For people like myself who put too much stuff in the garage already and are running out of space it’s a handy little feature because you can’t do that with a standard petrol mower or you’ll have petrol and oil running everywhere.”

To learn more about the benefits of the Toro 60-vault Recycler, visit Toro Australia’s website today.