Thanks to Martin Collins and D&A Irrigation, the country racetrack has a brand new fibre sand track and Toro’s 300 series High Pop Heads and nozzles, P220 Valves and a GDC decoder system.

D&A Irrigation’s Dave Horton says it took the contractors between six and eight weeks to install the Toro irrigation system, with great results.

“The weather down in Warrnambool is quite extreme at times with the wind and the rain but the installation process was pretty smooth considering.

“It’s a bit of a challenge to work around the horse training schedule of the club, as they were still open for business the whole time, but everyone seems really happy, and it’s all gone really well.”

Warrnambool Racecourse Manager, Daniel Lumsden, is very pleased with the way the Toro system has been working since the upgrade was completed at the end of July.

“We had an existing fibre, all-weather track down here which had been here eight years and had started to break up pretty badly, so we decided to replace it with the help of Racing Victoria,” explains Daniel.

“The old synthetic tracks had a wax binder through it so they didn’t need to be irrigated, but we put in a fibre sand track from Martin Collins, which needs to be irrigated three times a day to keep the sand wet at all times. That’s why we put in the Toro pop ups to do the job and they’re doing it perfectly. 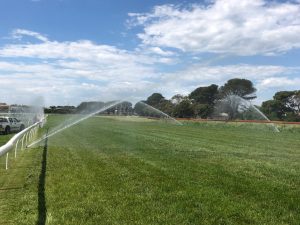 “A few of the trainers down here were very sceptical about the change in track and saw it as a downgrade from a synthetic track, but even the ones that were completely sceptical love it and have no problems with it. They go up on it rain, hail and shine at the moment. We had 150 mL here in September and it didn’t miss a beat the whole time.” 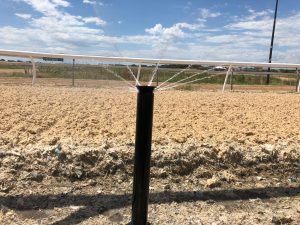 Daniel said the process of the upgrade and the end result has been fantastic thanks to the efforts of D&A Irrigation and Clint Shaw, the Regional Manager for Toro in Melbourne.

“Clint’s always happy to take my calls if I’ve got a problem with anything. We’ve got Toro automatic irrigation on our course proper with a GDC 200 controller, and anytime I call Clint he’s more than willing to help us out or point us in the right direction. I couldn’t be happier.”

Daniel is no stranger to the racing industry, having started his traineeship at Terang Racecourse back in 2001, after deciding university wasn’t for him. After three years at Terang he moved to England for a change of scene, before coming back to Australia and starting at Warrnambool in 2007.

So, as you enjoy a beer and a punt this Spring Racing season, spare a thought for the hardworking racecourse managers and contractors who make it all possible.