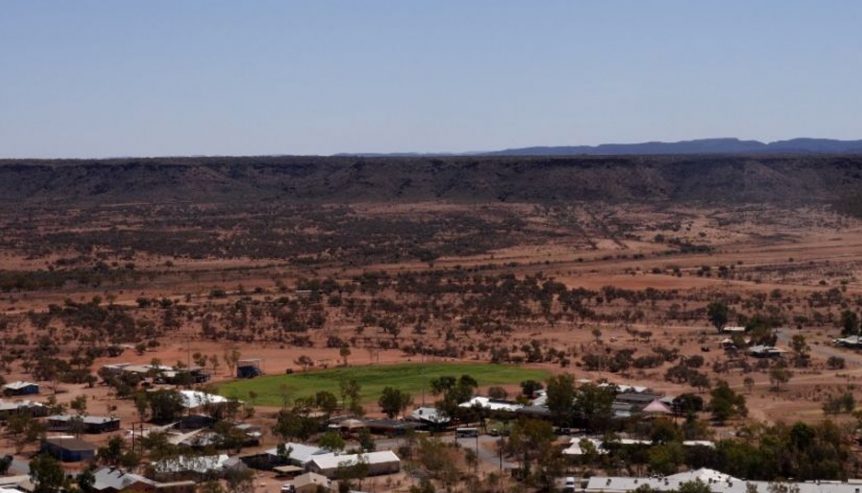 In the remote community of Santa Teresa, a remarkable project is nearing completion.

With the support of the Melbourne Football Club, the Melbourne Cricket Club and the MCG, Santa Teresa residents are transforming their once dusty football oval into a lush, green paddock.

The green oasis in the middle of the desert is a sight to behold, but it wasn’t always this way.

It used to be rocky and dusty.

Local players say when you hit the ground it was pretty hard, but now it will be much safer on the grass.

Atyenhenge-Atherre Aboriginal Corporation CEO Susie Low said the whole town was invested in getting the job done in time for next football season.

“Putting the irrigation in, people were watching from all over the community,” she said.

“You’d think it would be quite boring but they’d just come and watch it. And then seeding was something people got very excited about.”

Matthew Cavanagh is the groundskeeper in charge of the project.

He also makes sure the local brumbies that roam the desert stay off the fresh green grass.

Melbourne Football Club has been visiting Central Australia for more than a decade, and has formed a close bond with the town of Santa Teresa.

CEO Gary Pert said the idea to green the oval came from conversations with people in the community.

“About five years ago we were talking to the community leaders and we said, ‘How can we help?’, and right across the board they said we’ve got an oval that’s clay and gravel, and we have 200 kids playing on it in bare feet.

“They said if we could grass that oval, it would change this community.”

What followed was consultation with the Northern Territory Government, widespread fundraising and lots of planning.

Now the oval is 80 per cent grassed, and teams are set to start playing on it next year.

“It was a dream, and now we’ve got it, and we’re starting to see this grassed oval where the kids with their bare feet can run and jump on the oval and play the game.”