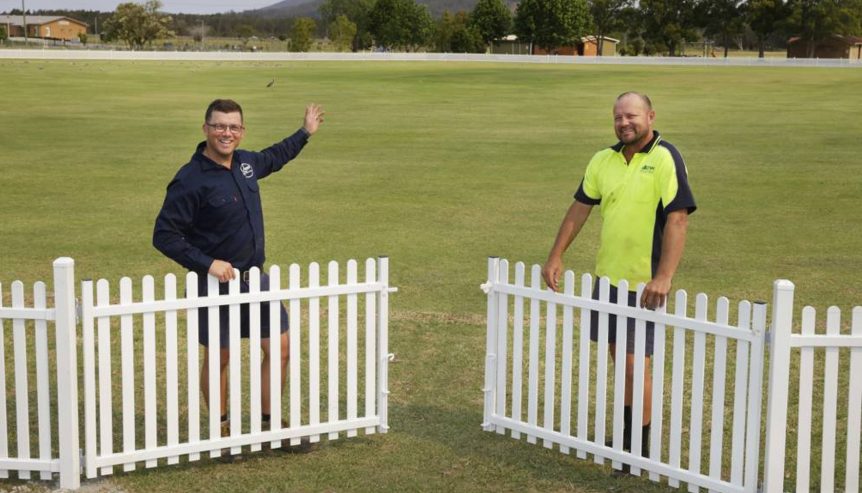 It’s been a long time coming, but the Phillip Hughes Oval has now been transformed into a worthy tribute to its namesake.

The new maintenance shed is brimming with machinery, the gleaming pavilion will today be handed over to the club, and the freshly-erected aluminium white picket fence adds a certain touch of class to the Macksville establishment.

When the project was first envisioned many years ago, the idea was simply to build something to house the club’s machinery.

“But it all sort of snowballed. We didn’t think we’d get the grant we got, but the mayor, the council, and our local member Melinda Pavey all got behind it,” one of the upgrade organisers Michael Stennett said.

The announcement of a $342,266 injection of funds last year meant the realisation of a grand master plan to create a cricket ground that would be the boast of the region, and help attract more juniors to the sport.

Mayor Hoban said the project not only had local support, but many fans from further afield who wished to see a fitting tribute to one of cricket’s greats.

“We wanted to spread the money as far as we could and give a bit of respect to the name. It’s been so good to get something like this done for the area,” Michael said.

Another of the organisers of the facility’s upgrade, Dane Luffman, said he’s “over the moon” about how it’s all come together.

He’s particularly rapt about the fence which he said really “finishes it off and turns it into a cricket field”.

“When I was a kid growing up I always wanted to play on a field with a picket fence.”

STRAIGHT AND TRUE: The new community-built fence is a thing of beauty

Phillip’s name also appears on the elegant white and grey pavilion which has been lovingly constructed by local cricketer Joe Costa over the past six months.

He said it’s been a privilege to be a part of the project and many of his contractors feel the same way.