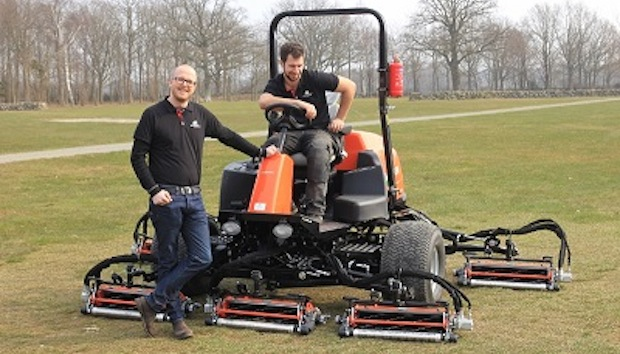 Trummenäs Golf Club is situated just 10 kilometres east of Karlskrona in the area known as Ramdala, a World Heritage site, on Sweden’s southern coast with views over the Baltic Sea. The area is renowned as a summer vacation destination and features many campsites and lodgings along the coast.

Offering golf on two courses, the club’s 18-hole, par 72, 5,900 metre course, designed by Ingmar Eriksson and opened in 1992, runs through parkland and along the coast with the 9-hole course providing golf on a pay-and-play basis. Every hole has a view of the sea.

Jan-Erik Andersson is the Club Manager and has been in the role since 2009. He holds membership number two at the club and has also acted as competitions chairman.

Before taking early retirement he was Chief of Logistics at DSV, the Danish company specialising in road, air, sea and logistics transport services throughout the world. For the past two years he has also been the chairman of the Swedish Golf Union’s Blenkinge area, one of the 21 districts administered by the SGU.

“The club has been in existence since 1989 when it began life as a 9-hole facility,” he said. “We opened the 18-hole course in 1992 and our aim is to be the premier golf club in this area. To achieve we realised that we needed to raise the quality of the course and one of our immediate concerns was our aging fleet of course maintenance equipment.

“We are also committed to raising standards right across the business. We have 1,200 members and they expect the highest levels of customer service and that’s why we make a significant investment in staff training.

We make a concerted effort to encourage new members and our recent ‘Introduction to Golf’ programme attracted 170 prospective new golfers, of which 70 stayed on and became club members.

“Being located in a major vacation area we attract many visitors in the summer months. We have a campsite adjacent to the course and some 500 summer residences within a few kilometres.

We also have a new housing development close by, which when finished will have 80 permanent new homes. 12 have already been completed and the residents are all potential members.”

As mentioned earlier, one the club’s major concerns in its quest to be the number one in the area was their ageing fleet of course maintenance equipment. Frederik Karlsson is the Course Manager and a graduate from the Swedish University of Agricultural Science. He is now in his third season at the club having previously worked at Lagans Golf Club, 60 kilometres south of Jönköping, for five years and prior to that for a year at Ringenäs Golf Club near Halmstad.

“The problem with our ageing fleet was obvious; we were spending disproportionate amounts of money on repairs. I have a dedicated mechanic who did a brilliant job keeping everything working, but to give you some idea of his workload back then, I allocated him an assistant from the greenkeeping team and he spent virtually all year in the workshop!

“So we made the decision to replace the fleet and put out a tender to all the major manufacturers. Jacobsen, through their local distributor Gräsvårdsmaskiner i Malmö AB (GVM) were our preferred option after we spent several month trialling and testing the various products.”

The area that the courses occupy was previously farmland with an underlying soil profile of clay. The greens are USGA specification and the grass is mainly Poa Annua.

This presents a challenge for Frederik and his team, but they work with it, ensuring that it doesn’t produce seed heads, especially during competitions.

“My philosophy for maintaining the greens closely follows the ‘Disturbance Theory’, Frederik added. “Annual meadow grass (poa) thrives when it is disturbed, while the finer grasses, bents and fescues, flourish in a more settled environment. If we can minimise the disturbance caused by our management practices, then we can control the poa.

“We hand mow our greens at 3 mm – 4 mm, depending on the conditions, with Jacobsen Eclipse 122 mowers four days a week and on alternate days we roll them. We don’t have any compaction problems so we don’t do any deep aeration, but we do micro tine little and often. I like the Eclipse mowers; the quality of cut is first-class and the ability to change the number of cuts per metre is a major step forward.

“We are trying to achieve more links-type surfaces here and are making changes to the 18-hole course to accommodate the longer hitters. However, you are normally judged by your greens and that’s what attracts visitors, so we’re aiming to make them fast and true.”

Greenkeeping in Scandinavia has restrictions that might seem penal in other parts of Europe. The use of chemicals is tightly controlled by law, so that means that the maintenance regime has to be smarter. Chemical applications are only permissible prior to snow cover. Although growth inhibitors aren’t banned in Sweden, Karlsson prefers not to use them.

“We have an excellent rapport with our members and that’s a result of our business ethos of providing an excellent customer experience and to the way we communicate with them.
We keep them fully informed of what we are doing out on the course and, most importantly, why we are doing it.

“In the high season I manage a team of 10, three of which are full-time and the others are on contracts that vary between six and nine months. At the beginning of each season we have an annual spring clean around the course and we ask for volunteers from the members to come and help. The response is always amazing and we’ll have people waist deep in water clearing ditches and drainage channels, edging bunkers, felling saplings, painting and much more. We lay on food and refreshments and it’s a real community weekend.”

On 21 – 23 May this year the club hosted the Nordea Tour, a satellite tour to the European Tour, which plays a major part in the Nordic golf rankings which is. The Men’s competition is open to both professionals and amateurs and featured 156 competitors over the three days. The club also hosted eight prospective members of the Swedish Olympic team, who attended for an extensive training session

“Attracting these type of events is crucial in the development of the club,” said Jan-Erik Andersson. “We have an excellent greenkeeping team, equipped with the latest machinery and supported by a valued partner in Jon Fundahn at GVM. We shall continue to invest in all areas of the club as we are determined to be the premier the club in the area.”