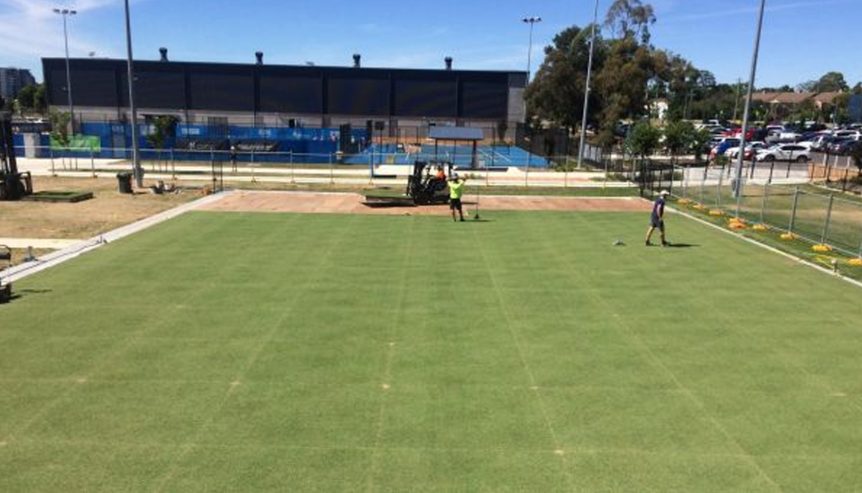 Think of a drop-in cricket pitch – but for tennis.

That’s what is happened at the Lyneham Tennis Centre as the capital prepares for its biggest tennis event of the century.

Australia will host the Ukraine in the Fed Cup on grass on February 10-11 and it is believed the Canberra facility will be the only venue in the world year to host tournaments on three surfaces this year.

The $27 million Lyneham facility hosted the Canberra Challenger on hard courts earlier this month and the ACT Claycourt International will be played in March.

Turf has been laid on the centre court at the request of Australian skipper Alicia Molik as she looks to guide Ash Barty, Dasha Gavrilova, Sam Stosur and Casey Dellacqua back to the World Group.

It marks the first time in 20 years the country’s best female players have competed in Canberra after Jelena Dokic led Australia to victory against Argentina on indoor carpet at the AIS Arena in 1998.

A grandstand will be installed to seat 3500 spectators and Tennis ACT boss Kim Kachel encouraged fans to get tickets to the World Group II fixture while they’re still available.

“The facility has undergone an amazing transformation. Within 48 hours the court had boards down and the grass started getting dropped in over the top,” Kachel said.

“In only a few days we’ve gone from a fantastic hard centre court to an unbelievable grass centre court, it’s incredible how quickly it has been transformed.

“It’s an exciting chance to see the Australian team and we’d really encourage to get online and avoid disappointment because tickets are selling fast.”

Curator Shayne Ried said the warm weather allowed the surface to be prepared so quickly following the Canberra Challenger which finished on January 13.

“It is like a drop-in [cricket] pitch but a pitch is only one module, with tennis it’s a bigger area and we’ve put in 153 modules here, so there’s a lot more joins and maneuvering to get the court in position,” Ried said.