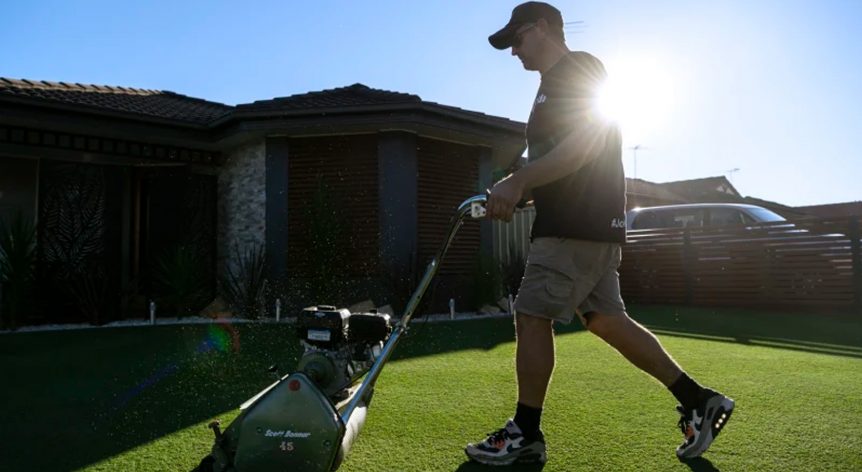 Last week a stream of NBN technicians working nearby detoured to his place to ask, “Is it for real?”

“People cross the road to touch it. They take their shoes off,” Russell says.

Obsession with lawns rose during lockdown and stimulated demand for turf, says Joe Rogers, business development manager at Lawn Solutions Australia, a company that represents 43 turf farmers. “Instead of spending a couple of hours every week at home, we were spending all day, every day at home,” he says.

The lawn replacement market boomed, with customers asking how they could “get their lawn to look like some guy’s on Facebook”, Rogers says.

One of those “guys” is Russell. On social media, locals say Russell’s lawn is the best on the street. He says it is likely the best in his suburb. But he is envious of other lawns. 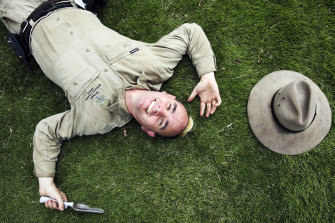 Just one site – Australian Lawn Fanatics (ALF) – has nearly 86,000 members, about 6000 more than the number of members in the Liberal Party nationally.

ALF reminds members that everyone “started with bare dirt or more weeds than grass and no idea what to do from there”.

On these social media sites, members discuss pulling up old lawns made of Buffalo grass for newer grasses. They post photos of perfect lawns that neighbours mistake for astroturf. That’s taken as a compliment by some. They commiserate at lawns ruined by lawn flies, weed infestations and waterlogging.

They post photos of lawns desecrated by neighbours who drive on the grass, ruining the perfection.

Like many lawn devotees, Russell aims to have the best and shortest lawn around.

He used to have a type of kikuyu but changed to a rare grass, Greenlees Park, which is dark bottle-green coloured and is often used on bowling greens and sporting fields.

Russell has a mower for every cut, plus a groomer, a scarifier to remove thatching, a daily cutter, a whipper snipper and an edger.

To create a diamond pattern in the lawn, he cuts in one direction and then the other. The stripes are created by pushing the blades of grass in two different directions.

“If you want a lawn like mine you need a cylinder mower,” says Russell, who runs popular Facebook pages to help people restore Scott Bonnar cylinder mowers. The company stopped manufacturing in the 1980s.

He admits: “I am a lawn tragic, I love my lawn, I tend to it; if something goes wrong, I get depressed.”

To respond to public demand, the Royal Botanic Garden Sydney brought back turf trials about five years ago.

The trials have generated a stream of visitors stopping to ask for advice, such as what grass works well in their part of Sydney or what soil is best, the Botanic Garden’s trial garden horticulturalist Bryn Hutchinson says.

“[There are] husband and wife teams taking off their shoes – that happens every week.”

The Botanic Garden is growing 15 plots of different grasses, including native zoysias. They provide the fine-leaf, low growing, soft grass that is popular now. “It is much like a golf course-quality grass to the untrained eye,” Hutchinson says.

The trials will evaluate garden worthiness and how well these grasses perform in Sydney. They will also look for grass varieties that are pest- and disease-resistant without a need for heaps of fertiliser.

“Thankfully most turf is really good,” Hutchinson says of those being tested. Turf doesn’t like being waterlogged, but most had performed well in the recent rains.

There is, however, a backlash against lawns by some gardeners, who say it reduces biodiversity. But Hutchinson says a bit of lawn enhances enjoyment.

“It is not a good idea for everybody to put turf everywhere, because it reduces the potential for plantings,” he says. “But there’s nothing wrong with a small patch of lawn that encourages people to come out to use the garden; because gardens are for people.”

Interest on social media is contributing to the growing popularity of grasses such as zoysias and TifTuf, which are nipping at the verge of industry leader Sir Walter Buffalo.