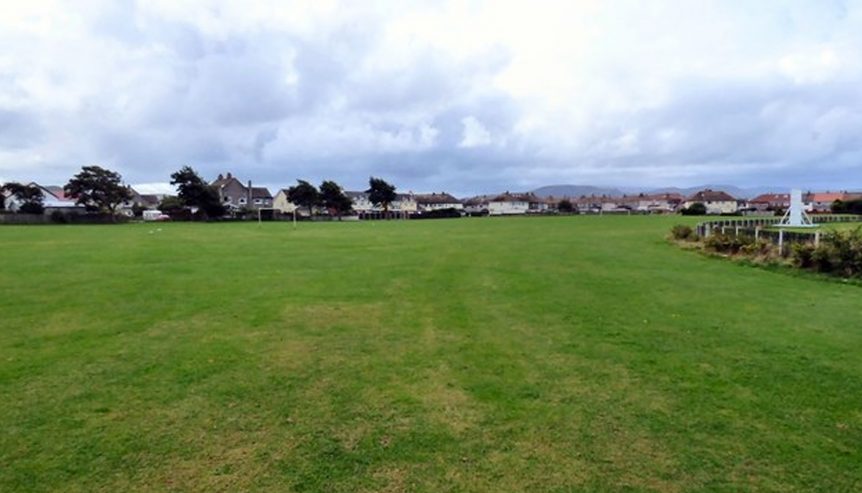 As some superintendents have experienced, water on golf courses may be restricted or even prohibited during prolonged summer droughts, which may cause dormancy or even death of turfgrass. Partial or complete loss of turfgrass during severe droughts can result in significant reestablishment costs.

Previous studies at Kansas State University and elsewhere have indicated that applying some water during prolonged droughts may mitigate the severity of drought stress and improve the ability of turfgrasses to survive the drought and recover upon rewatering (4-10). This strategy could be a compromise between saving water and maintaining turfgrass viability through droughty periods, even if it results in some dormancy or brown turfgrass during the peak of the drought. Nevertheless, little research has quantitatively determined the minimum amounts of water that can preserve turfgrasses through severe drought and enhance their recovery thereafter.

In 2017 and 2018, researchers at Kansas State University investigated the minimum amounts of water required for three turfgrass species to survive and recover after prolonged summer droughts. Included in the studies were two cool-season turfgrasses (Seed Research 8650 tall fescue and a blend of Mallard and Ridgeline Kentucky bluegrass) and a warm-season turfgrass (Meyer zoysiagrass).

Establishment
Kentucky bluegrass sod was installed on Sept. 28, and tall fescue sod was installed on Oct. 10, 2016, under a rainout shelter (that excluded all precipitation) with a commercial greenhouse design but open sides for air exchange. After the dry-down and recovery study in the first summer (2017), the original tall fescue sod was relocated to a nearby automatic rainout shelter on Oct. 3, 2017, while new Kentucky bluegrass sod was installed alongside it on Oct. 13 (Figure 1A, below). Meyer zoysiagrass, which was adjacent to the tall fescue and Kentucky bluegrass plots in the second year (so that all were under the same automatic rainout shelter), had been sodded several years earlier in 2013; the same zoysiagrass sward was exposed to prolonged droughts in both years of the study (Figure 2A). 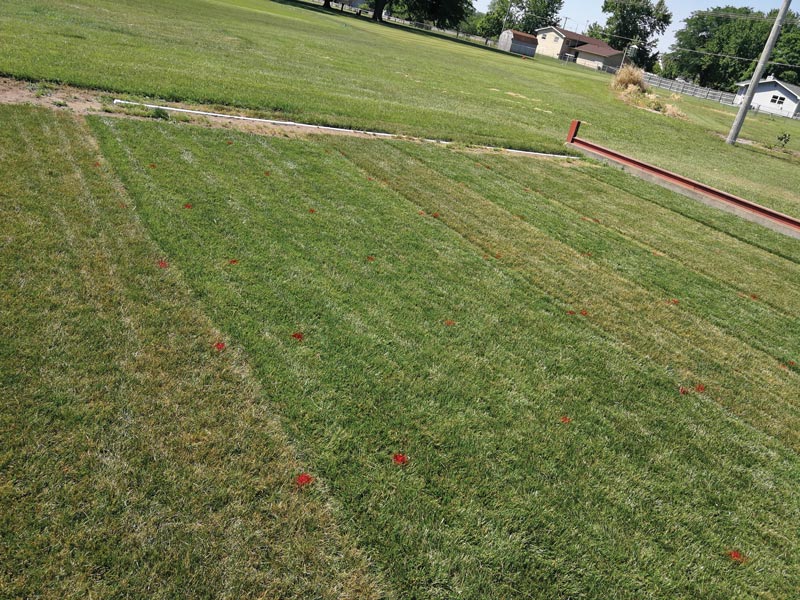 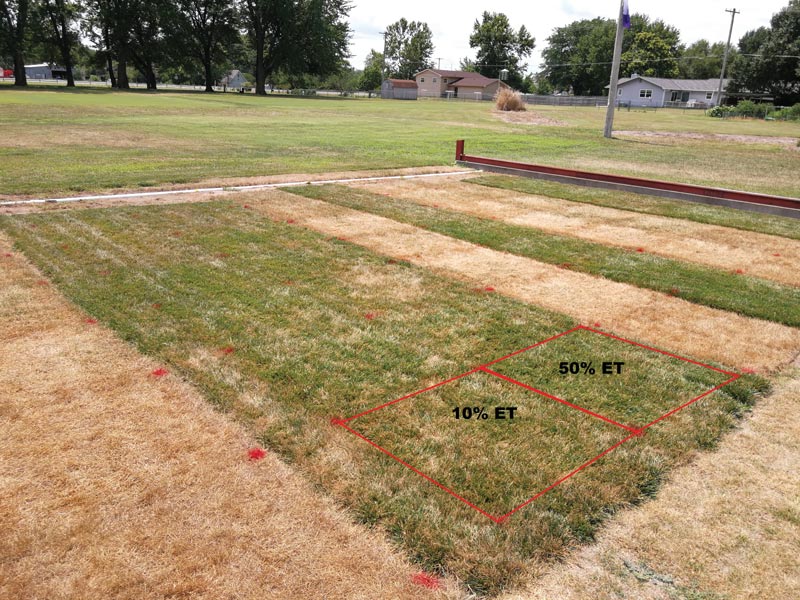 Figure 1. Cool-season turfgrasses on the second day (A, top) and 33rd day (B, bottom; all Kentucky bluegrass dead) of the drought period in 2018.

To summarize, tall fescue and Kentucky bluegrass were both exposed to intensive drought in the first summer after fall sodding in each year, while zoysiagrass, also exposed to intensive drought, had been established for several years. Furthermore, the same swards of tall fescue (sodded in the first year and resodded to a different rainout shelter in the second year) and zoysiagrass (sodded and established four years earlier) were exposed to two consecutive years of drought, while new Kentucky bluegrass was sodded in both years because it did not survive the drought, as described below.

Irrigation
Tall fescue and Kentucky bluegrass were irrigated at 0%, 10%, 20%, 30%, 40% and 50% reference evapotranspiration (ET) replacement using daily data from an on-site weather station. As a reminder, ET is an estimate of the water use of well-watered grass (4.7-inch/11.9-centimeter height), based on weather data. Therefore, the irrigation treatments represented replacement of only a fraction of the amount typically required for maintaining turfgrasses with good visual quality (3). 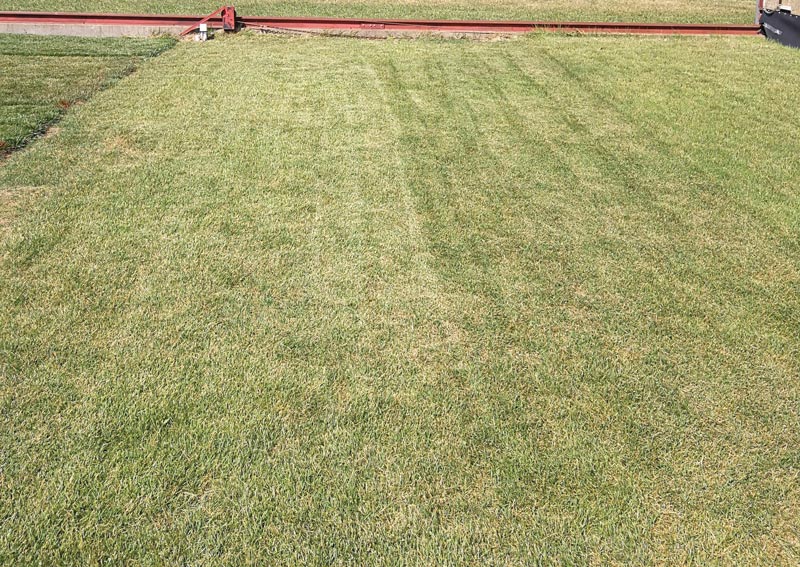 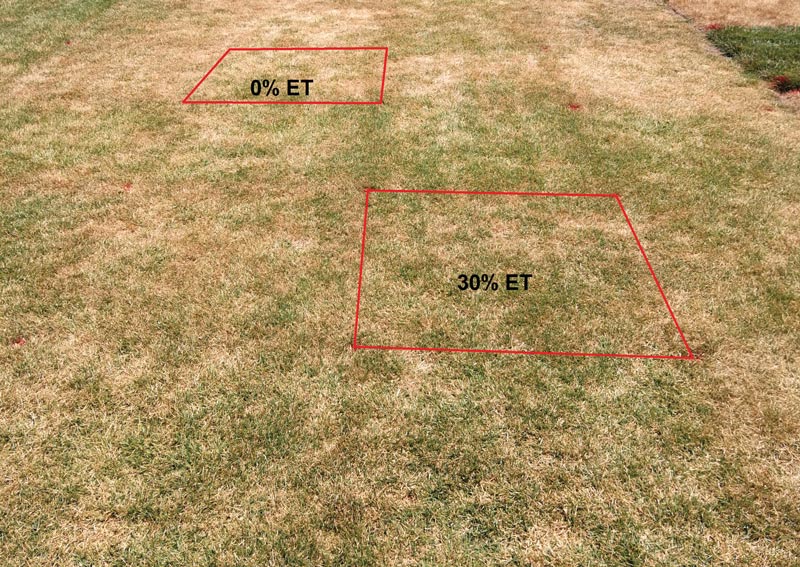 Figure 2. Zoysiagrass on the second day (A, top) and 33rd day (B, bottom) of the drought period in 2018, which was the second consecutive summer of drought stress for this zoysiagrass.

Evaluation
They evaluated the performance of the turfgrasses weekly with visual quality ratings (on a scale of 1 to 9, where 1 is dormant or dead, 9 is the best quality and 6 is minimally acceptable quality); average normalized difference vegetation index (NDVI, a measure of leaf healthiness and color), using a handheld active optical sensor (RapidSCAN CS-45, Holland Scientific); and green cover (percent green pixels in digital images), using a Nikon D5000 digital camera and a lighted camera box. They 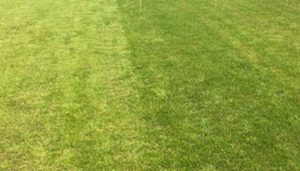 Turf performance during drought and recovery

Tall fescue and Kentucky bluegrass
Tall fescue maintained higher quality longer than Kentucky bluegrass under minimum water applications in both years as the prolonged dry-downs progressed (Figures 1B, 3A-B; for brevity, only data from the second year are shown). During the first summer after fall sodding, tall fescue, even with no water inputs (irrigation or precipitation), retained some greenness throughout an 83-day dry-down (approximately 28% green cover in the first year and 4% in the second year at the end of the dry-downs). After being resodded to another location that fall, tall fescue then recovered from a 60-day drought in the second summer, although the recovery was slower than in the first year (one to four weeks in 2017 and four to seven weeks in 2018 to recover to acceptable quality). 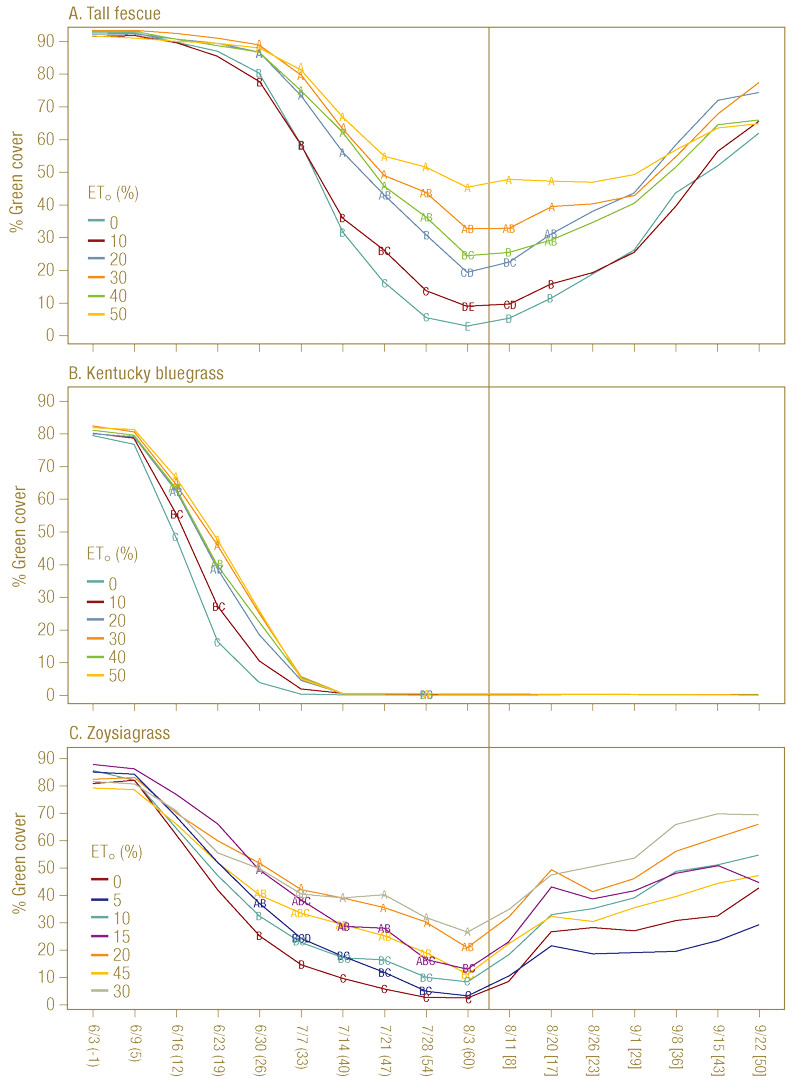 Figure 3. Percent green cover of tall fescue and Kentucky bluegrass irrigated at 0% to 50% evapotranspiration (ET) replacement treatments, and zoysiagrass irrigated at 0% to 30% ET in 2018 (second year of study). Numbers in parentheses on the x-axis denote days after the beginning of drought. Numbers in square brackets denote days after full irrigation was resumed (denoted by vertical line). Means with no letter in common within a measurement and day are significantly different; means on days without letters were not significantly different.

Conversely, in both years of the study, Kentucky bluegrass did not survive dry-downs at any irrigation level (0%-50% ET) in the first summer after being sodded (new sod was laid each fall) (Figure 1B). The reasons for the failure of Kentucky bluegrass to recover are not certain, but it may be related to the relatively short establishment period between fall sodding and exposure to severe drought in the next summer (that is, being sodded for only about 7.5 to 8 months). Previous studies at Kansas State University and elsewhere have indicated that Kentucky bluegrass that was either seeded in the previous fall or earlier, or sodded for more than a year, could recover from severe drought (1, 2, 4, 7).

Zoysiagrass
As for zoysiagrass, our results indicated that minimum water inputs of as little as 20% to 30% ET replacement could mitigate drought stress and slow the decline in turf quality, and ultimately reduce turfgrass damage compared with no water inputs. Irrigation at 30% ET maintained >75% green cover in zoysiagrass throughout the two-month drought in the first year, while green cover in 0% and 5% ET zoysiagrass plots declined to 30% but recovered to about 60% green cover after four days of full irrigation (data not shown).

Our results indicate that if expectations for turf quality are lowered to below what is normally considered minimally acceptable, then irrigation can be reduced to conserve significant amounts of water in tall fescue and zoysiagrass. For example, in tall fescue, during the 83-day dry-down in Year One, irrigation at 50% ET reduced water applications by 5.5 inches (14 centimeters) compared with irrigation at 80% ET and by 9.4 inches (23.9 centimeters) compared with irrigation at 100% ET, which is typically required to maintain high-quality turfgrass. Similarly, reducing irrigation in zoysiagrass from the recommended 60% ET for warm-season turfgrasses (3) to 30% ET saved 3.5 to 4.3 inches (8.9 to 10.9 centimeters) of water; further reductions to 20% ET saved another 1.2 to 1.6 inches (3 to 4 centimeters) during the two-month dry-downs with few additional impacts on green cover. These water savings will be more significant when large areas of roughs covered by zoysiagrass or tall fescue are managed during prolonged drought.

Tall fescue and zoysiagrass both recovered after severe droughts, but recovery was better at higher levels of irrigation (40%-50% ET in tall fescue and 20%-30% ET in zoysiagrass) than with no water inputs (from irrigation or precipitation). However, Kentucky bluegrass did not survive either year of the drought at any irrigation level (≤50% ET). Our results indicate that tall fescue is better adapted than Kentucky bluegrass to prolonged drought in the first summer after fall sodding in deep soils. It is important to note that the mechanism for drought resistance in tall fescue is its ability to grow deep roots to exploit moisture deeper in the soil profile. Therefore, in shallow or compacted soils, or in sandy soils that hold less water than our silty clay loam soils, tall fescue may not fare as well as it did in our study during prolonged drought. Interestingly, Kentucky bluegrass also generally has good drought tolerance (its mechanism is to go dormant during drought, then recover after the drought ends).

However, the results suggest Kentucky bluegrass may require more establishment time after sodding than tall fescue for optimal drought resistance.

The results from zoysiagrass and tall fescue both indicate that detrimental impacts on turfgrass performance could be more severe in a second consecutive year of prolonged drought if irrigation were continued at these minimal irrigation levels. This is probably because the turfgrass uses significant amounts of carbohydrates to survive the first year of drought and does not have time to fully replenish its energy reserves by the beginning of the following summer.

Turfgrass managers and/or policymakers may avoid unnecessary turfgrass loss and conserve more water during prolonged droughts by restricting irrigation to specific amounts of water (that is, fractions of ET) according to turf species rather than by imposing traditional restrictions such as allowing irrigation one or two days per week.