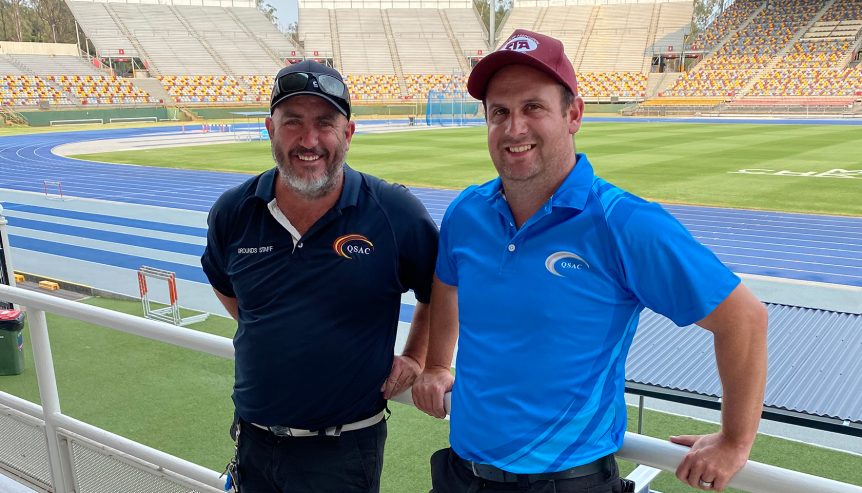 Matthew Oliver has not only had one of the more interesting careers in the Australian turf industry, but he also happens to be one of the friendliest people you’re likely to meet.

Having had a career which includes stints at Melbourne’s Marvel Stadium, the prestigious Melbourne Grammar School and the role of Grounds Manager at the National Football Stadium in Papua New Guinea, it’s safe to say he’s learned a fair bit along the way.

In December last year, Matt made the move up to Brisbane to take on the role of Grounds Manager at Queensland Sport and Athletics Centre, one of nine venues owned by Stadiums Queensland. turfmate’s Amy Foyster caught up with him recently to chat about his career so far and how he’s finding the new gig.

turfmate: How did the new job in Queensland come about?

Matt: It probably goes back to my wife and I having holidayed up in Queensland a lot over our 13 years together and we often semi-joked around how good it would be to live up in the Sunshine State. Every time we came up to the Gold Coast, Sunshine Coast, Brisbane or even Port Douglas we would often spend a lot of time on realestate.com.au, just seeing what properties were worth and whether we could make the move a viable one in the future- The weather and lifestyle was a huge drawcard for us.

Then last year I was lucky enough to be offered the role of Grounds Manager at QSAC.

My wife was pregnant at the time, so it was a fairly stressful period, but I moved up in December last year and flew back and forth to Melbourne to be with my wife and young baby. Rheanna and Reuben then flew up to join me in early February. I have a three-year contract with Stadiums Queensland, based at Queensland Sport and Athletics Centre on Brisbane’s southside and it’s a role which I absolutely love. 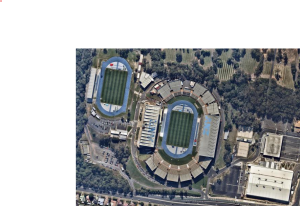 tm: What were you up to in Melbourne before then?

M: My last job in Melbourne was at Marvel Stadium (previously Etihad Stadium), as part of the grounds team, but I was based out at the Carlton Football Club. The stadium had a maintenance contract with Carlton, so I was involved in the reconstruction of the oval with Gavin Darby and then looked after the new playing surface.  I had two stints with Marvel Stadium from the start of 2010 to the end of 2014, before moving to Melbourne Grammar School as John Shannon’s assistant for a two years. I then spent a year over in Papua New Guinea before heading back to Marvel Stadium in 2017 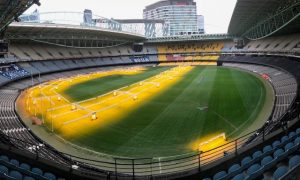 tm: Can you tell us a bit more about your job in Papua New Guinea?

M: In October 2016, I went across to Port Moresby to grow in their new National Football Stadium and train up the local groundstaff in preparation for the FIFA Under 20 Women’s World Cup, which was taking place in November and December. We were lucky enough to have four group matches, the semi-finals and World Cup Final at our venue, so it was a great experience and a great event to be a part of. I had a one year contract; fly in and fly out for two weeks on, one week off. The venue holds rugby league (the PNG Hunters play their home games out of the venue) and it is a brilliant little 15,000 seat stadium. 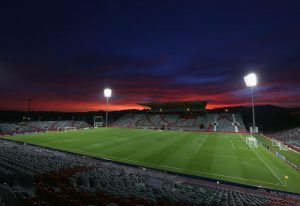 tm: How was working in Papua New Guinea different to working in Australia?

M: The biggest thing was dealing with the cultural differences among the staff. I had seven local staff from a wide variety of backgrounds around the country, some of whom barely spoke English, so that was quite a challenge. None of them had any formal turf qualifications so I had to essentially start from scratch and build up their knowledge base.

tm: That must have been hard! How did you get through that?

M: One of the things I learned early on was that you had to gain the team’s trust and build a rapport before you could start working with them and have a level of respect there, because if you don’t have their respect, they weren’t going to produce any work. It was a really good learning experience and to this day it was the most rewarding job I’ve ever had. The local staff were extremely grateful for the time I put in teaching them things, from driving a tractor, to mowing straight lines, putting in soccer goals to irrigation repairs – things like that they had never done before.

But they certainly taught me a lot as well about life skills – so it was mutually beneficial. They taught me a lot about empathy. Work’s not their priority, family is everything and it makes you appreciate how the locals live. Australians could really learn a thing or two about how they care for each other over there.

tm: Now that you’re back in Australia, can you tell us a bit more about your current role at Queensland Sport and Athletics Centre?

M: We have a team of six looking after our grounds department here – myself and five others. There is a senior groundsperson, David, who is my assistant and then four full-time groundspersons underneath him. We’re a 32-hectare site, so we are quite large and diverse, with two sporting fields: our 48,500 seat Main Stadium which used to be known as ANZ Stadium and the 3,000 seat State Athletics Facility, which is used for over 200 athletics events annually. 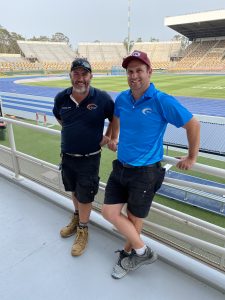 We’ve also got 11-hectares of irrigated lawns and gardens that we maintain, as well as landscape maintenance at the brand-new State Netball Centre called Nissan Arena- The home of the Queensland Firebirds who are part of the Suncorp Super Netball Series and the Brisbane Bullets who play all their home matches here as part of the National Basketball League (NBL). We look after all of the venue logistics as well for various functions and events, so we are quite a diverse venue. We are proud of the multi-purpose nature of the venue. 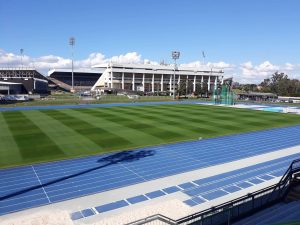 Our main tenant here is the Queensland Academy of Sport, but we also host local and international soccer and hold concerts in the Main Stadium – the last concert we had here was Eminem and we are hosting some soccer matches in January. We were meant to have Metallica recently, but the whole concert tour got postponed, so hopefully that will be rescheduled soon!

tm: What are the main differences between turf maintenance in Queensland, compared with Victoria?

M: The weather is a major factor. Brisbane is significantly warmer than Melbourne on an annual basis. Brisbane does have a higher average annual rainfall than Melbourne, but the key difference is that in Brisbane there will be significant periods of no rain and then a heavy downpour and then another significant period of no rain. However, this year has been an incredibly dry and challenging year from a turf management point of view, as Brisbane normally averages over 1200 millimetres of rain a year, but this year at the venue we’ve only received 580 millimetres, which is down over 50 per cent on the average. 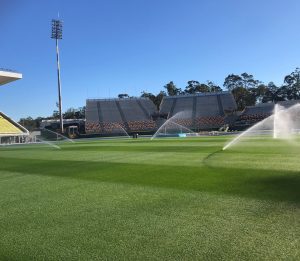 Temperature-wise it’s generally quite stable in Brisbane, with an average of high 20s to low 30s. That is probably the main difference – that you can rely on the weather to a degree, unlike Melbourne! Up here, you can plan your renovations knowing your soil temperatures are going to be where you need them to be to conduct herbicide applications to remove ryegrass out of your warm season grasses at the end of winter.

tm: Speaking of the turf, what types do you have?

M: We have Wintergreen Couch across both sports fields, including some trial areas of Tiff Tuff. Our lawn and amenity areas are all Wintergreen Couch as well. We overseed our two sports fields and high-profile lawns with Premier III Ryegrass in April, as generally that’s our window to conduct post-summer renovations, and then we’ll chemically remove and culturally transition out the ryegrass in September/October depending on our events schedule. In summer, we mow at a height of 14 millimetres and then raise to 24 millimetres for winter sport which works well for us.

turfmate wishes Matt and the team all the best for the upcoming soccer series in January and hope they get to see Metallica one day soon!