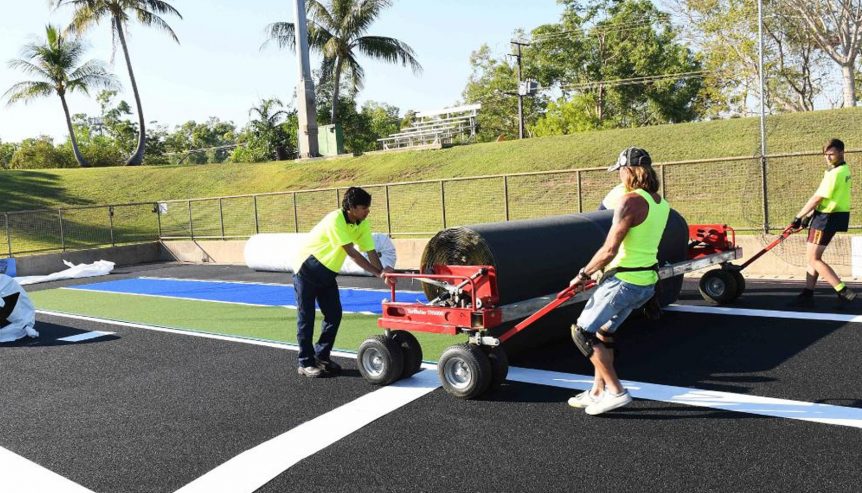 Fresh green turf was rolled out at the Marrara Hockey Stadium this morning, as a part of $1.1 million in upgrades to prepare for the Darwin International Hockey Open.

Hockey heavyweights from across the globe will be going head to head at Marrara Hockey Stadium from September 18-22, with tickets going on sale today via Ticketbooth (https://events.ticketbooth.com.au/event/darwin-international-hockey-open-2018).

The world number one Australian Kookaburras will be taking on Rio Olympics gold medallists Argentina (world ranking two), Malaysia (12) and Japan (16) during the open.

Kookaburras’ Darwin product Jeremy Hayward said he was looking forward to returning to the Top End.

”It’s always good playing in front of family and friends going back home,” he said.

“Last year we had a great turnout at the end of the local hockey season and it was great to get out into the community and visit a few schools too.”

In preparation for the matches, the NT Government gave Hockey NT a $1.1 million funding boost for upgrades at Marrara hockey grounds including laying down a new rubber shock pad and turf at the field and installing 1000 lux lights.

“As far as top quality sport goes, I can’t remember in my lifetime — a world number one and world number two playing in any sport in Darwin,” he said.

“So this is a great opportunity not just for people who follow hockey, but sports loving people to come along and watch top quality sport.

“Malaysia actually beat Argentina earlier in the year, so to think this might be a lay down between Australia and Argentina for the final on September 22 — I’m not so sure.

“There’s always a potential for an upset.”