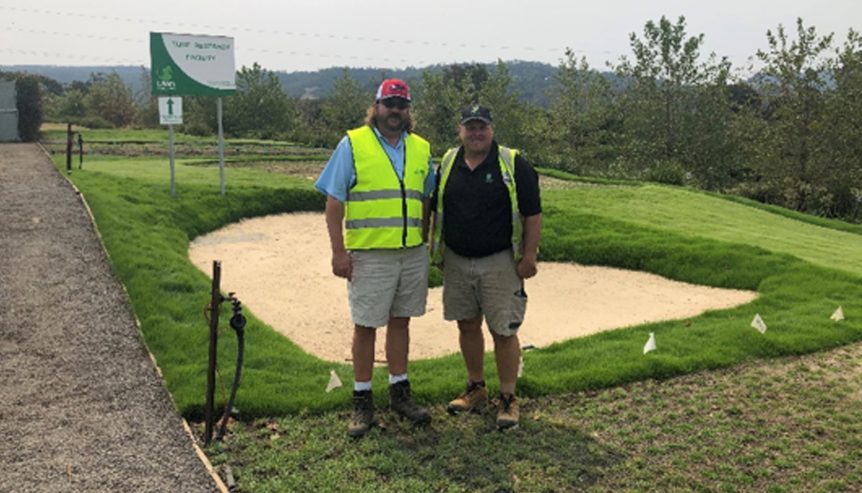 “Number one, there’s been tremendous interest in [Lawn Solutions Australia varieties] Sir Grange and TifTuf and as such growers are expanding, planting more hectares,” he said.

Mr Skaggs said he believed there was huge potential in Australia for these grasses. He said ITGAP would continue to support growers through planned trips and making available any necessary resources.

AusGAP, with an exclusive arrangement with ITGAP, ensures AusGAP certified growers meet all areas of compliance under the ITGAP guidelines. AusGAP’s Mick Sutton and LSA’s Joe Rogers chaperoned Mr Skaggs as he inspected AusGAP turf production facilities in NSW and Victoria, and audited the AusGAP program.

Mr Skaggs said the inspections primarily focused on protecting the varietal purity of Sir Grange and TifTuf by ensuring the original stock sources were pure and subsequent plantings remained pure.

The training involved a review of ITGAP processes.

“We’re doing a review of our initial ITGAP specs, our rules and regulations and how we translate that to AusGAP,” he said.

Mr Sutton also strengthened his knowledge of ITGAP and how it relates to the AusGAP program.

“We’re reviewing those documents to make sure that if there’s a question that we didn’t get on the first time around we catch it this time, whether it’s identifying a weed, whether it’s questions about care or cultural practices – we just want to go through those reports and make sure that we’re getting them [growers] the information they need and it’s also to make sure that we have a good record of what’s being grown,” he said. “These varieties are important to this area, they’re important to the growers and we certainly want to make sure that all the propagations are authorised, that it’s on record and that we have a location for everything so that we don’t get grasses out there that don’t meet our quality standard.” 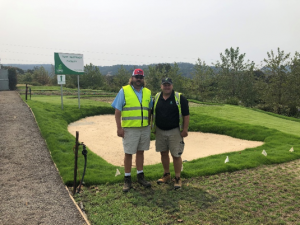 ITGAP has exclusive arrangements in Australia and New Zealand with AusGAP. The International Turfgrass Genetic Assurance Program (ITGAP) is the world’s premier turf quality assurance system that monitors turf production sites worldwide to ensure that turfgrasses are grown, inspected, and sold under a rigorous set of rules and guidelines. ITGAP inspectors from the USA undertake these inspections in all regions that produce ITGAP certified grasses worldwide, except in Australia. In a

world first, AusGAP has been entrusted with upholding the standards of the ITGAP protected grasses through an exclusive agency agreement.

AusGAP, as the only registered ITGAP agents, ensures Australian growers meet all areas of compliance under the ITGAP guidelines. The Australian turf accreditation program provides Australian turf buyers the assurance that purchased turf adheres to a stringent set of quality standards.

Mr Skaggs has served as Certification Program Manager with the Georgia Crop Improvement Association since June 2013. In this role, Skaggs oversees the certification of seed and turfgrass, including field inspections, seed conditioning and program promotion. Mr Skaggs also serves as Executive Secretary for the Georgia Soybean Commodity Commission and the Georgia Seed Association.