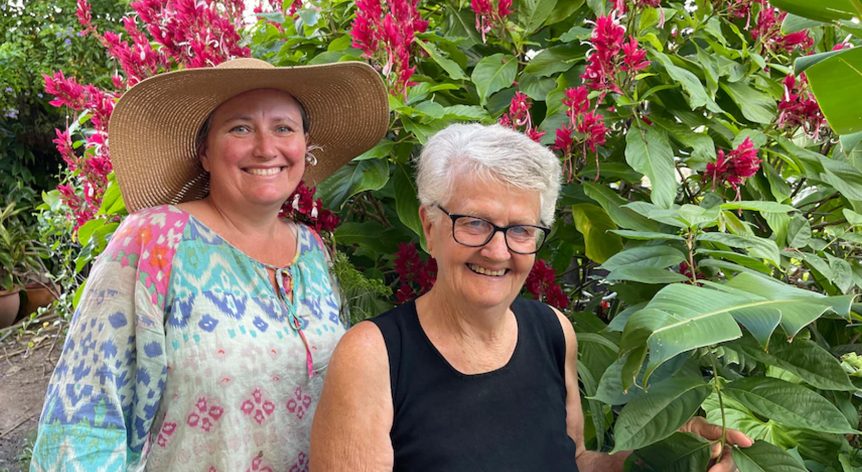 As flood victims deal with insurers, assessors and builders to repair their damaged homes, one woman wants to make sure their backyards and gardens aren’t forgotten in the recovery effort.

Consulting gardener Kate Wall won a humanitarian award after the 2011 floods for her work mobilising volunteers to clean up and repair hundreds of gardens in Brisbane’s southern suburbs.

Six weeks on from south-east Queensland’s latest flood disaster, she’s trying to rally a new army of green thumbs to give hope to people overwhelmed by the recovery process.

Sandra Dunglison’s Yeronga home was spared when the Brisbane River reached its peak in February, but parts of her beloved garden were under water for days.

As the frothy, brown waters receded, she pulled on her gumboots and spent hours hosing her plants.

“The mud seemed to be so much worse than last time,” Ms Dunglison said.

“A friend and I spent a couple of hours washing the leaves of our rock orchids and a couple of special plants – a flame tree and a banksia.”

“They can’t breathe, they can’t photosynthesise, when the mud sticks to the leaves.”

Ms Dunglison said, after 2011’s disaster, she was too preoccupied with her flood-damaged home to worry about her garden. With the help of friends, Ms Dunglison managed to save her precious Illawarra flame tree.(ABC Radio Brisbane: Hailey Renault)

Six weeks later everything died except for a single, stoic bottlebrush.

This time only four plants have died, and her two favourite plants look likely to survive.

“They both have new shoots so we’re hoping they’ll stay healthy.”

Kate Wall said it was shocking to see Brisbane go through another major flood, and plenty of work needed to be done to save the city’s forgotten and neglected gardens.

She urged flood victims and volunteer gardeners able to spare a weekend and some elbow grease to contact her so she could start pairing people up.

“This time around I’m trying to encourage multiple, small connections instead of just one team working around the place,” she said.

“The sooner you can get into the garden, the more you can save, not just in terms of plants but the damage flooding does to the soil.”

Adopting a flooded lawn – with the homeowner’s permission – could also go a long way to improving someone’s mental health following the disaster.

“One of the big problems in 2011 was by the time people got to their yards, their lawns were waist high, the grass had gotten into the garden beds, and it was a terrible mess to try to restore,” Ms Wall said.

“It goes a huge way towards helping people feel like everything is neat and tidy, [it] discourages burglars and looters from coming in, and makes the place feel loved again.” Junette Chardon plans to give away propagated plants to people who can’t afford to replant.(ABC Radio Brisbane: Hailey Renault)

Ms Wall said she was working with fellow volunteer Junette Chardon to build a collection of donated plants for people who couldn’t afford to replace what was lost.

Ms Chardon, who was part of the group that toiled to save plants after the 2011 floods, said she was “excited” to pitch in again.

“People do remember what we did for them and how we got in and got all muddy ourselves,” she said.

“I’m not a great big nursery so it’d be nice if people could generously give a few to supplement what I’ve got.”

June’s unit in Yeronga has become an impromptu collection point for plants and cuttings to distribute over the coming months.

Ms Wall said anyone who needed help, or could volunteer, could contact her directly.

“Reach out and ask, let us know you’re there and you need help,” she said.

People can also access free garden-recovery information by attending a series of sessions hosted at Brisbane City Council libraries in the coming weeks.