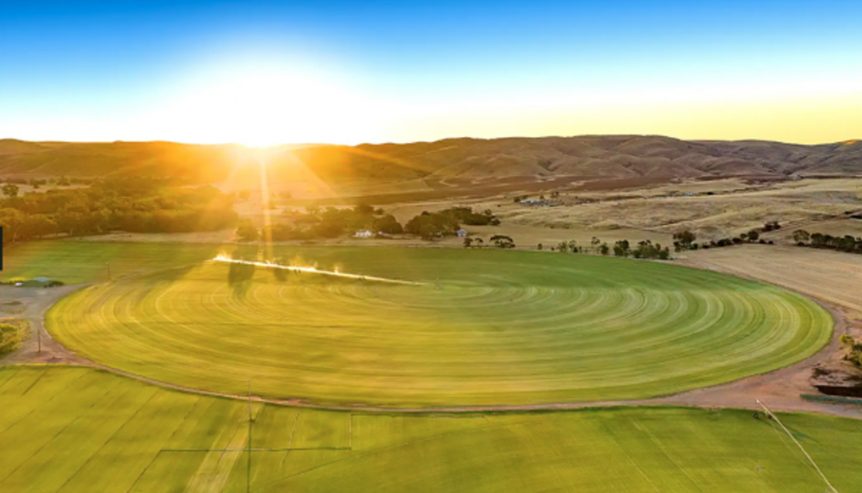 Watching the grass grow might sound like a boring pastime, but it can be a multi-million dollar operation.

Idioms aside, the Australian turf industry grew roughly 38 million square metres of instant lawn in 2020, which was harvested, rolled up and sold for about $280 million.

Unlike most of the 230 turf growers across the country, Doug Fleet had the pleasure of monitoring his luscious fields from the sky. And the grass was, quite literally, always greener on his property.

A keen light-aircraft pilot, Mr Fleet has taken many flights from his South Australian farm, recalling having his son on his knee when he was a child. Years later, he would sometimes fly over to the nearest turf farm before returning to his 111-hectare property, Marne Valley Turf.

“You can come and land from any angle,” he explained, adding there was a windsock in the centre of the property.

After three decades of growing and harvesting turf on the rich alluvial flats of the River Marne near Cambrai, Doug and Diana Fleet are planning their retirement.

“My son is a successful commercial pilot now,” Mr Fleet said. “He’ll never come back on the farm.”

At 72, Mr Fleet has spent most of his life living and working on the land, including dairy, sheep and potato farms. “Farming is in my blood, but it’s time for me to move on,” he said.

Their property was listed for sale with a price guide of $5.3 million, marketed as a successful turnkey agricultural investment.

The farm is a year-round wholesale and retail supplier to Garden Grove Supplies, councils and sporting clubs. There is an astounding 640,000 square metres of farmland dedicated to growing Sir Walter buffalo, Santa Anna couch and kikuyu varieties.

“We harvest every day, Monday to Friday,” Mr Fleet said. When Commercial Real Estate spoke with him mid-week, he had “five semi loads going out today”.

The husband and wife team have grown their property and business into a successful, profitable and well-maintained operation – but they won’t just sell to anyone.

Mr Fleet said he wanted to make sure whoever took over would look after his business partnership with Garden Grove and his small but loyal team of employees.

“Some are on their third set of long-service leave,” he said. “The farm has a full-time manager who runs the place and a full-time mechanic. If something breaks down, he’s in the shed and repairs it.”

Any prospective buyers don’t need to know about the turf industry because “the staff have been here for years and know how to run the day-to-day operations”.

“Someone can come in and take over straight away, supply Garden Grove and the money will be in the bank the next month.”