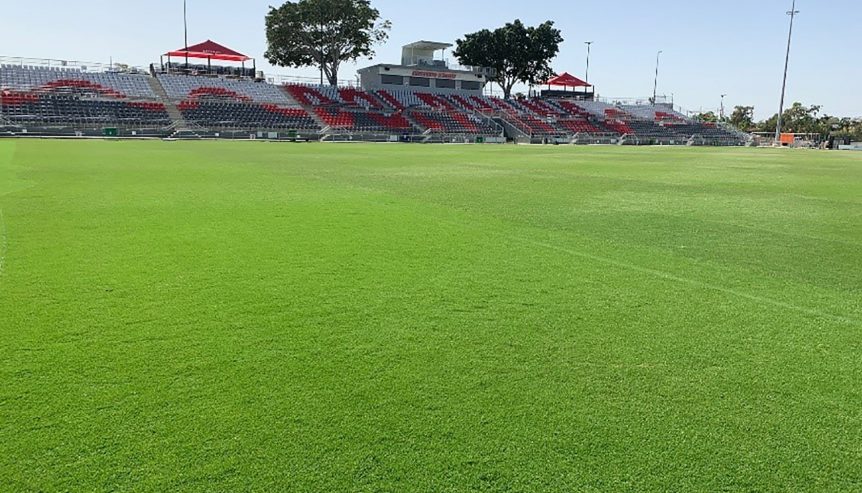 TifTuf Hybrid Bermuda grass is kicking water-saving goals at sportsgrounds, ovals, parks, schools, and front and back yards across the country.

From Subiaco to Brisbane, TifTuf has demonstrated that once it’s established it stands above the pack in drought conditions.

Brisbane’s Redcliffe Dolphins Stadium has been so impressed by TifTuf that the club is preparing to stolonise a second oval with the grass.

This turf can be established with a fraction of the water that most other varieties require, partly because it can lay its roots down in less than a week. Research has shown that it requires on average 38% less water than other varieties.

Impressive results are being reported in the field, too. The image below shows the Dolphins Stadium after a recent weekend of heavy use that included five games of gridiron and junior sport activities. The oval was aerated and highly scarified six weeks ago, with only a light application of fertiliser applied.

Dolphins Stadium staff now use 50 per cent less water on this field than they did before TifTuf was installed. 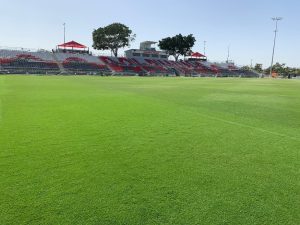 Also in Brisbane, TifTuf is standing tall at perhaps one of the most trafficked parks in Australia. The Flowstate lawn at Brisbane’s South Bank (below) was looking worn and in need of repair coming out of winter. It’s now looking fantastic again following aeration and an application of fertiliser. TifTuf is the first turf variety in this position that has come through winter and not had any area replaced. 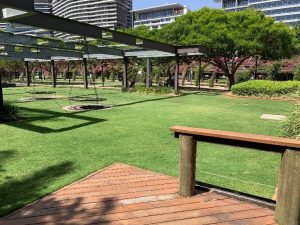 Wooloowin State School in Brisbane has also tasted success with TifTuf. Four hundred children utilise the 1,600m2 area pictured below every day. This field was 70 percent dirt before TifTuf was laid 12 months ago. The area is now thriving and even under the shade of the fig tree the TifTuf is surviving. 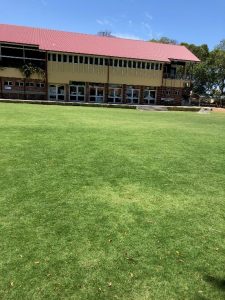 Subiaco Primary School in Perth replaced worn out goal squares in December 2018 (see pictures below – the TifTuf square is in the middle ground). The TifTuf was laid with no special attention in preparation – the old turf was cut out, the soil was scraped, and standard poultry manure and wetting agent were added. The school’s annual maintenance program is to water when needed, with one application of fertiliser and one aeration per year. Almost 12 months on TifTuf has hardly worn and still has 100 percent coverage. Until Tiftuf was laid, the area (kikuyu) was replaced every year, as it was unable to cope with the amount of use.

TifTuf shows it’s a standout in cooler areas, too. Bon Thomas Reserve in the western Melbourne suburb of Deer Park, and McKechnie Reserve in nearby St Albans have ovals grassed in TifTuf. Bon Thomas Reserve’s oval was line planted in December 2018, while the McKechnie Reserve oval was solid turfed in November 2018. Both looked in great shape at a recent industry event (below) following a harsh Melbourne winter. 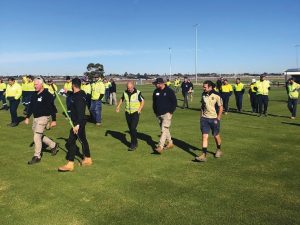 Sports applications are not the only areas benefitting from the water-saving turf. One resident from Wagga Wagga in NSW proudly posted the photo below on social media, which show his immaculate TifTuf in the front yard of his home.

TifTuf is proving a popular turf for the sports market and beyond. It’s demonstrating that it requires less water and can handle the Australian climate and conditions. 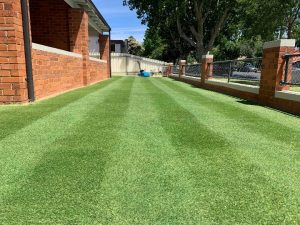