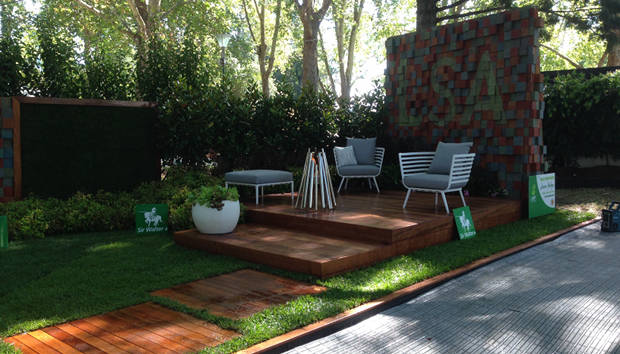 Brad Chandler is the owner of Venus Landscaping and he has certainly been making a name for himself in recent years!

Brad used to collect Venus flytraps as a kid and his love for them is where his business name came from.

He has been working hard in the horticultural industry for over 25 years now, after leaving school in year 11 to follow his passion for landscaping.

He completed an apprenticeship with Outer Eastern College of TAFE  (including a recreational turf management qualification) and worked in their grounds immediately after he graduated, before going out on his own.

“In the beginning I was working on wages, then I registered my business name and I was working weekends laying a few lawns, bits of paving, lots of mowing and block clearing and even property clean ups for real estate companies.

“Then the work got so much that I ended up going full time on my own and took it from there.

“Landscaping is my passion and turf is my real passion, which is why we lay so much grass. So for nine months of the year we are pretty busy creating that instant garden look for our clients.”

Venus Landscaping mostly work in a domestic market, however they have completed a few commercial projects such as the landscape work for Shell, 7-Eleven, Nissan Australia and Carlton United Breweries. Brad also works together with ‘Lilydale Instant Lawn’ as a preferred installer for their domestic market and the occasional larger scale work such as wineries in the Yarra Valley and ‘the Shrine of Remembrance’ grass surround.

The past drought has had a massive effect on the work that Venus Landscaping do, as it did for everyone in the outdoor industry.

“Because we were in drought for ten years it definitely changed the plants people needed, the turf types, the watering systems and many other aspects of their outdoor area. We really had to diversify otherwise we wouldn’t have had any work.

“People weren’t looking to lay lawns that needed heavy watering through summer, they were starting to go to synthetic type lawns or to use coloured mulches on garden bed areas. The mulch industry took off, because everyone realised you could put a thick mulch down to stunt weed growth and keep the ground moist underneath, but then they also discovered river pebbles which gave a modern earthy look and all sorts of new ideas and looks began to grow. Those new looks and materials gave people a solution to keeping the garden they love.

“Warm season grasses such as Buffalo, Kikuyu, and couch – all of those were successful grass types able to survive in our Melbourne climate. We stopped laying cool season grasses like tall fescues and those sorts of water dependant grasses, so that pretty much wiped that market out.

“Then we changed irrigation systems from pop ups to drip lines and water tanks and pumps.

“Because I love grass in the landscape I had to try and keep promoting new ways to get turf in and figure out how they were going to keep their gardens alive and vibrant, so we offered to put a water tank in or different irrigation methods, something like that. It has the added bonus nowadays of being low maintenance in most cases, as clients love being able to have the outdoor living space, but often have little time to maintain their garden.”

Despite the drought ending, Venus Landscaping still do a lot of drought tolerant planting, especially because they have became familiar with the plants and new irrigation systems.

Brad suggests that it is quite common that people in domestic markets want a creative feature to the landscaping of their backyard.

“They might want stack stone paving, feature fountains or garden highlights along the way.

“Even sections of rendered wall, are popular additions now incorporated into backyard gardens. People often want a decking area added, and water features are always quite popular as well.

“Paving is massive now, there are so many different kinds of sandstone, bluestone and granite pavers to choose from. Most people in our market want low maintenance, water saving type gardens.”

Recently, Brad worked on the Lawn Solutions Australia Garden at the Melbourne International Flower and Garden Show (MIFGS), which he says was fantastic.

“We worked on that project with Jason Hodges in Melbourne and also worked at Floriade in Canberra with him.

“I had met Jason before at a Sir Walter conference, and when they developed Lawn Solutions Australia (LSA) they hired him as their ambassador.

“When Lilydale Instant Lawn went with LSA to America on a turf farm tour, I was given the opportunity to go along to see what I could learn, so I spent a bit of time with Jason and other authoritarians on all things turf over those few weeks.”

The project at MIFGS was an eight to ten day build with many sections of grass to help promote LSA. One of the walls of grass had a ‘Mown a Lisa’ (Mona Lisa) cut into it, but basically it was a flat garden with different types of lawn, interspersed with features like decking.

Brad says the experience, and working with Jason, was all very good fun.

We look forward to following the work of Brad and his team from now on – we are sure there are many more fascinating domestic projects to come.