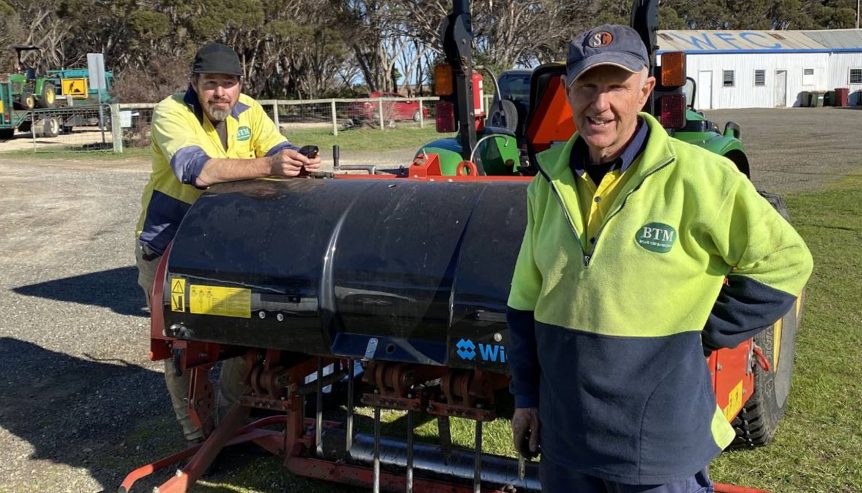 Remediation works have begun on Kangaroo Island’s five football ovals to get the playing surfaces back in top condition after the summer’s horrific bushfires.

The SANFL identified a need to address oval surfaces impacted on during the fires by vehicles, CFS fire trucks and even animals taking shelter.

Even Dudley United’s oval at Penneshaw on the eastern end of the Island far from the fires ended up playing host to displaced campers and locals at the peak of the fires.

The SANFL applied for the funding on behalf of all clubs and KI Council and was able to secure $197,000 through the AFL’s Community Relief Fund designated for bushfires.

SANFL are managing the project on behalf of the Kangaroo Island Council with Living Turf and Belair Turf delivering works.

Workers from Belair Turf Management last week were out at Wisanger oval and will continue to work their way around the Island’s ovals.

Council workers were liaising closely with SANFL and the appointed turf expert, to co-ordinate the remediation work with club volunteers.

The first step is to top dress, while at the conclusion of the season, the turf experts and supporting contractors will return and work with clubs and council to continue major remediation.

KI Football League secretary Cathie Tydeman said all the club’s were very appreciative of the funding and looked forward to playing on new services when senior competition resumes in 2021.

The league has decided to limit the 2020 season to Under 12s and Colts due to the COVID-19 coronavirus restrictions.

KI’s five football clubs meanwhile had also received additional bushfire recovery grant funding of $5000 each from the SANFL/AFL, while the Kangaroo Island Football League has secured a $40,000 grant.

More on those allocations in upcoming edition.

Some locals and visitors fell back to the Penneshaw football oval on January 9 as the fire impacted on the area to the west of Kingscote.